Why books are better than the movies made from them

I’ve occasionally been called on to talk to various groups—teachers, librarians, others—about science fiction. It’s an interesting challenge, since you can’t be sure that your audience knows the first thing about the topic.

I start, of course, by establishing my bona fides: talking about my own writing and publications. Then I go on to say something like this…

First, I need to deal with the question, “Why do you 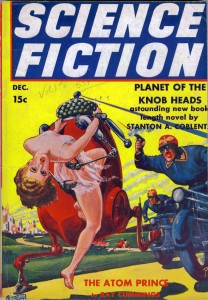 write that stuff?” It sometimes seems that, like Rodney Dangerfield, SF “can’t get no respect.”

Though the situation is better than it once was, there has been a well-documented tendency over the years for “serious,” “literary” writers, editors and critics to look down on science fiction as something childish and inferior. (Looking at the accompanying image from one of the lesser “pulp” magazines of the 1930s, it’s perhaps not hard to see where that tendency came from…)

For SF readers, this attitude becomes amusing when one of these “serious” writers decides to write a novel set in the future, extrapolating from the present (the very essence of science fiction) and then hastens to assure everyone (as does his or her publisher and every critic that reviews it) that what he or she has written absolutely is not science fiction–even though those well-read in the SF field know that the writer has simply rehashed (and not as well as they were originally hashed) ideas long since explored by SF writers.

(Margaret Atwood is sometimes guilty of this, having infamously dismissed SF as “talking squids in outer space” while insisting that her futuristic novels The Handmaid’s Tale and Oryx & Crake are not SF—when, of course, by any reasonable definition of the term, they are. But I don’t want to be too hard on Atwood: she really does have affection for and understanding of the genre—she just also understands that the literary world sees it as a bit of a ghetto, and she understandably doesn’t want to be consigned to it.)

Condescension, ignorance and insult from literary types has led to a corresponding backlash among some SF fans and writers against mainstream stories, which are stereotyped as plotless, pointless character studies that fail to understand or deal with some of the most powerful forces shaping our world: the advances in science and technology.

Personally, I believe there is good writing to be found in every genre, from literary to SF to mysteries to romances, and the walls between them are artificial creations of publishers, marketers, critics and academics. I believe equally strongly there is bad writing to be found in every genre, some of it produced by the most well-respected writers and publishers. As Theodore Sturgeon, himself an SF writer (and a very good one) put it, “Sure, ninety percent of science fiction is crud. That’s because ninety percent of everything is crud.”

So I’ve never felt I was lowering myself to write SF and fantasy. Quite the contrary; writing fiction strictly about the here and now, or the recent past, seems incredibly limiting to me; it’s like typing while wearing a strait-jacket. SF and fantasy allow my imagination free rein; any time in the past, the present or the distant future and any place in this universe or any other are available to me as settings; creatures both human and non-human are at my beck and call to serve as characters; and there is no idea so outré that it cannot be couched in SF terms and turned into a story.

SF writers often speak of “the sense of wonder.” That’s what the best SF and fantasy appeals to.

What is science fiction? Well…it’s not as easy to define as you might think. Norman Spinrad says “SF is what SF editors buy,” but that just puts the definition off on the editors. The aforementioned Theodore Sturgeon said, “When science is so integral to the plot that the story falls apart without it, it’s a SF story.” Robert Heinlein, paraphrasing Reginald Bretnor, stated that it’s “that sort of fiction in which the author shows awareness of the nature and importance of the…scientific method,…of the great body of human knowledge already collected…,and takes into account…the future effects on human beings of scientific method and scientific fact.”

Science is obviously a part of science fiction, or it wouldn’t be called science fiction, but it’s important to remember that the word “science” is being used in a broader way than might be expected. In fact, rather than chemistry or physics or biology, the science perhaps most often seen in science fiction stories is sociology, if that is taken to include history, economics, mob psychology, and combinations of the above.

Of course, the hard sciences are frequently featured, too. But whatever the science content, the most important part of that last definition for me is that science fiction “takes into account…the future effects (of science) on human beings.”

Good science fiction forces the reader to engage his or her brain. Part of the pleasure of reading science fiction is picking out the background assumptions which are behind the plot, finding the connections between a strange new world (even if that world is called Earth) and our own, and thinking about what will happen next, even after the story is done. Good science fiction is an incitement to deep thought about a story, the ideas it contains, and the issues it concerns.

My friend and former writing instructor Robert J. Sawyer, Hugo and Nebula Award-winning science fiction author (and certainly Canada’s best known writer in the field), says that “SF writers themselves argue this question (what is SF?) all the time, but  here’s one good definition: science fiction is a laboratory for thought experiments about the human condition; it lets us examine what it means to be human in ways that we simply can’t in real life, because it would be unethical or impractical to conduct the experiments. Using literary devices such as displacement in time or space, or metaphorical others who let us exaggerate or isolate parts of the human psyche, science fiction allows us to see ourselves from odd angles, catching glimpses of truths that might otherwise be hidden from view. “

“Thought experiments about the human condition,” of course, could be used to describe ordinary fiction, but it seems to me that most ordinary fiction does not sufficiently address the fast-changing nature of the world in which we live.

In Star Trek IV, where the crew of the Enterprise journeys back in time to 20th-century San Francisco, a woman asks Captain Kirk if he’s from outer space. He says, “No, I’m from Iowa. I just work in outer space.”

An SF writer could say, “I’m from the present. I just work in the future.”

Permanent link to this article: https://edwardwillett.com/2013/01/my-introduction-to-science-fiction-for-non-sf-audiences/

Take walk as the sun's going down to the Grow Regina Community Garden in Regina, Saskatchewan, now being cleared for winter. Also, squirrels, a couple of cats, two snowshoe hares, and lots of flying geese.

From Government House: the gentleman presenting me (along with several others) with the Sovereign's Medal for Volunteers is His Honour the Honourable Russ Mirasty, Lieutenant Governor of Saskatchewan. I received it for my work with Regina Lyric Musical Theatre over the years. "The Sovereign’s Medal for Volunteers honours individuals who have demonstrated passion, dedication and commitment to their communities through significant, sustained and unpaid voluntary contributions. Through their efforts, they have made a difference in fields including the arts, organized sports, youth and community organizations, and social issues. Their achievements include long-term, significant fundraising or lifetime dedication to service within community organizations."