I wonder what my college professor would think of me now? 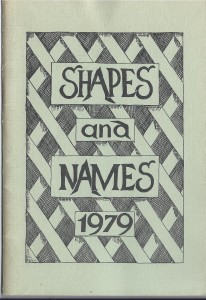 The next post after this one is going to be a very early short story of mine that I just uncovered. Called “Reunion,” it was published in the Spring, 1979, issue (Volume 2, Number 2) of Shapes and Names, the literary magazine published by the department of English of Harding College (now Harding University) in Searcy, Arkansas, from which I received my B.A. in Journalism in December, 1979. When this issue of Shapes and Names came out, I was 19 years old.

The forward to Shapes and Names was written by Dr. Neil B. Cope, Chairman of the Department of Journalism–my department; he was one of my professors.

It’s a bit lengthy, but here’s the bit that caught my eye, and make me wonder what Dr. Cope would have thought of my career:

Now comes a moment of truth to the Harding student of arts and humanities, when he passes with one act of volition from consumer of literature to that of of author of it. No longer is he sampling anthologies or weighing professors’ evaluations of the classics. He has come now to authorship himself, his own words having been inked into thoughts and ideas.

Writing for a campus journal or entering a literary contest does not one a full-fledged author make. No contributor expects the Pulitzer, and the Nobel Prize will take a little longer. Nevertheless, the creative compulsion that drives our campus writer to get on with this business is a quality most precious. The excitement of it stirs one almost to prophecy.

Such creativity was referred to by ancient philosophers as inspiration. (More aptly than “inhaling,” perhaps, it has also been looked upon as “breathing out, a very god-like pursuit.) In ancient times, also, the muses often assumed oversight in this gift-of-the-gods process of creativity.

What happens, once this disturbance prevails and compulsion of will takes over? Our Harding student, as any winner of the Pulitzer much less the Nobel, discovers that writing is a great deal of work. Not only must he let his creative juices flow, feeding them with tremendous quantities of time and ink, he must preside over a process of craftsmanship that is more like work than if it required a union card. The choices to set in motion, the processes to utilize, even the alternatives to deny–all these and more make writing creative, a craft that will not be denied. That spells WORK: it’s little wonder that Latin Opus, major or minor, is still conceived as sustained units of labor by authors, wherever you find it. Now that the truth is out, do go ahead and produce that work of literature!

What right have we to expect anything in this regard from the Harding student in the years ahead? Will anyone make any significant contribution to the ongoing swell of the literary stream?

Perhaps a score or two of Harding alumni have become full-fledged authors of books. What we await, however, is one with fire in his eyes, who will not let up until he has attained a greater audience than a few of his peers.

He will be a capable technician, of course. He will know synonym from synecdoche. He even may have learned to “rime.” Perhaps from play with light verse or story he will have moved on to novels or drama. From his own experience he may have discovered enough indigenous material out of which to produce his Yoknapatawpha. Like Faulkner, and Tolstoy before him, he will probably have to discover his own superb art of passing on feeling from one man’s heart to another’s. It is just possible that from him will come words to stir, to provoke, and even to move large numbers of his contemporaries. Our Harding author may have among his readers, and more of them as time goes on, those who have forgotten to ask what glimpse of truth they seek, as Conrad said of his. Indeed, if the ba baric subcultures that everywhere seem to be surfacing eventually become dominant, the darkness of the approaching years will require much light…

Hmm. Well, I may not quite have achieved some of those lofty goals, but I ain’t done half bad, really. And Shapes and Names contains one of my earliest published stories ever. So go on to the next post, and read it, if you dare.

Permanent link to this article: https://edwardwillett.com/2014/03/i-wonder-what-my-college-professor-would-think-of-me-now/