My daughter Alice on CBC Radio

Read the first two chapters of Door into Faerie!

Answering some questions about writing

I was recently asked, by someone on Facebook, several questions about writing, and I though the answers might be of general interest. And so here they are! 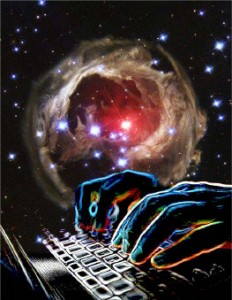 How do you decide what ideas/characters/plots/etc. are good? Or which to keep?

Hmmm. Of course, I think they’re all good. When I was starting out and writing everything “on spec” (that is, writing it first and then trying to sell it) it would simply be whatever idea grabbed me the hardest and could keep me going through the long process of writing a novel. These days, it’s a little different. My Masks of Aygrima series (written as E.C. Blake) began with me offering my agent, Ethan Ellenberg about 10 ideas, each less than a page of text. He was most taken with Masks, and thought it had the most potential for him to sell, and so that was the one I developed. But those other ideas are still sitting there and I could turn any one of them into a story—or series of stories—I’d  be proud to tell.

Sometimes you discover as you begin to develop an idea that it just won’t work, or that you just don’t know how to tell it yet. Better to cut your losses and move on to something else in that case. In the end, the only criteria is, “What do I want to write? Am I really willing to expend potentially hundreds of hours turning this idea/character/plot into a fully fleshed story?”

I’d also add that it’s important to be well-read in the genre in which you are writing, or at least aware of what else is being written in it, so that you don’t spend those hundreds of hours on an idea that seems fresh to you but in fact has been done to death. (Or, in the case of zombies and vampires, undeath.)

I tend to start writing and research as I need to. So, for example, Door into Faerie, the final book in my five-book Shards of Excalibur series from Coteau Books, required me to take a video tour of the Weyburn Public Library (I grew up in Weyburn, but the library has changed a lot since then), research the floor plan of a small Scottish castle, look up a Scottish magazine one of my characters might be reading, and pay a visit to Cannington Manor Provincial Park, where the climax takes place. The only research I did ahead of time was the visit  to the park, since I knew that was going to be my setting. The other things I Googled as required. That’s pretty typical for me.

How do you plan a longer piece of writing? What’s the process? Did that flow naturally for you, or did it require some practice?

I do a five- or six-page single-spaced plot outline. This allows me to at least know the general shape of the story, and suggests scenes that will need to be dramatized. Then I begin writing, and typically don’t look at the outline again unless I run into trouble. In many cases I depart from the outline entirely. A good example is my novel Terra Insegura, sequel to my Aurora Award-winning science fiction novel Marseguro. It’s about 120,000 words, and at about the 90,000-word mark I realized that the ending I had sketched out in my outline (the outline from which I had sold the book to DAW Books) simply wouldn’t work, so I had to re-plot to the end. One reason for that was that, simply due to the technical necessity of needing a new viewpoint character through whom readers could experience a scene that I absolutely needed to dramatize, but that was set in a location where none of my existing viewpoint characters could be, I had introduced a new character whose story arc had become integral to the book. To do him justice and to do justice to other plot threads which had arisen organically during the writing process, I simply had to change my planned ending.

All of this flows naturally to me now, but I’ve written a lot of books since I’ve started, and there’s no doubt it was a clunkier and more feeling-my-way process in the beginning.

How do you have two characters in conflict, both with their own views and beliefs, possibly with one or both having opinions that you disagree with, and keep them believable, and keep the conflict flowing naturally?

I’m not sure how to answer this except to say that’s that what writers do. As a writer, you have to be able to inhabit the skin of a variety of individuals who are nothing like you and make them believable. Human nature is human nature and much of writing is akin to acting: you’re pretending to be someone else. What you contribute to each character is your own understanding of human nature. Every character, even if he or she seems very different from you, at least reflects some aspect of how you understand humans to work. A good writer can make characters with whom he or she apparently has nothing at all in common—neither body, belief, or background—come alive because, despite apparent differences, both the writer and his/her characters share the common experience of being human: of loving and hating, of being happy or miserable or angry or afraid, of being healthy or ill or in pain, of, simply, living.

How do you create characters, deciding their beliefs, their goals, their appearances, their relationships?

It’s generally dictated by the story. I tend to start with an idea for a plot, and then populate the plot with the characters necessary to tell it. In broad strokes, in most plots, you have someone, or several someones, who are trying to accomplish whatever it is the plot requires to be accomplished; and someone, or several someones, who are trying to prevent that; and a variety of peripheral characters who may simply be caught in the crossfire or exist for nothing more than to fill out the world so that it doesn’t look like an empathy stage set. As I noted earlier, sometimes characters appear for technical reasons: I need someone to do something in the plot which the existing characters cannot do. But even minor characters should be as real as possible, and sometimes you realize, as you think about who they are and how they are involved in what’s going on, that they aren’t minor at all, and then they move into the story’s heart.

Appearances are, or should be, dictated by the story as well: the world in which it is set, the background of the characters, and the function they serve in the plot. I tend not to describe characters in too-great detail (not any more, anyway), unless their physical characteristics are important to the plot.

Why do you write?

I write because I was a huge reader growing up. I loved the worlds authors had created in the books I read, and I wanted to write my own stories in my own created worlds which readers would love just as much. I don’t write to change the world, or preach, or do anything, really, except to entertain: but within the pages of that entertainment, readers will undoubtedly discern something of how I view the world, and if that alters the way they view it so that it’s closer in alignment to mine, then that’s all right with me, too.

Permanent link to this article: https://edwardwillett.com/2016/03/answering-some-questions-about-writing/