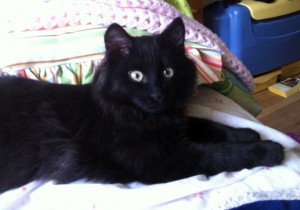 I know, I know. I post about getting a cat and then I fall silent, which can lead to only one conclusion: the cat ate my blog post.

Not quite true, although Shadowpaw (Look! Another cat photo! Because there’s such a shortage of those on the Internet!) is sitting on my lap as I type this, purring and quite insistent I pet him. (It’s actually amazing how well I can type with cat legs sprawled across the backs of my hands.)

My real reason for not blogging: I’m in a bit of a crunch trying to get another rewrite done of Masks (wearing my E.C. Blake hat) because things are moving ahead to its release this fall and, you know, publishers really like to have a final manuscript well before the actual printed book hits the shelves. They’re funny that way.

This is an interesting rewrite, with two major components. One is the addition of new material at the front end related to character development and back story: I’m dramatizing material that was being covered in flashbacks.

The second involves going through the whole manuscript to change my main character’s age from 13 to 15, which is a change I’ve been thinking about for a while…and which Sheila Gilbert at DAW, my editor, turned out to be thinking, as well.

See, Masks began life as a proposal for a short and simple stand-alone YA or even late-middle-grade fantasy, so I made my main character younger than most of my characters. But as the writing continued, the book expanded, and got more complex, and got darker, and…well, suffice it to say that a slightly older protagonist will make a number of things work better both in this book and especially in the next two books in the trilogy.

So far I’ve concentrated on the new material, brief scenes from Mara’s childhood, but this week I’ll be moving through the rest of the manuscript adding those two years to Mara’s age. It’s not something I’ve ever undertaken in a manuscript before, so it should be an interesting process. I’ll blog about it once it’s done.

Permanent link to this article: https://edwardwillett.com/2013/02/the-traditional-blog-post-about-why-im-not-blogging-much/