A bunch of stuff I wrote about biomass hits the Web

"Please forgive me for not accepting your rejection letter…"

Because the section of Sam’s memoirs following his wedding deals with a visit during his honeymoon to his boyhood home in Scotland, I’m inserting, as a kind of flashback, a few entries drawn from much earlier in the memoirs, when he talks about his childhood. Then I’ll resume the memoirs from where they left off in Part 27.

One day I said to my mother when I was 12 years old, “What had happened when I was around 3 or 4 years old?”

Mother looked at me “What do you mean? Remember and mean?”

“I really don’t know but something has bothered me for a long time. There seems to have been a great disturbance, a quarrel, a fight or some misunderstanding. Please tell me what it was so I will not be bothered or troubled.”

Mother said, “I will inform you and it is only right that you should know.

“The incident you refer to was when your father wanted to go to the United States of America to start a new Life.

“He felt, on account of conditions in Scotland and there were so many emigrating to America that it would be the best for the children, Sam and Fred, and also me.

“The Americans were opening up their Country and they were wanting people for Agriculture and Manufacturing, etc.

“It was a new Country and greater opportunities if one worked; Pioneers they required and no class distinction.”

Mother had a premonition that if he went, she would never see him again, desertion or Killed. Mother was correct as at a later date she was informed that he was killed in a rail accident before he could save enough money to send for us and that he was buried in Philadelphia.

Mother said she was surprised that I could remember the incident as it must have made a great impression on my mind.

Mother seemed to be able to glimpse into the future; you might call it Perception or Intuition.

She could tell what was happening to any of her relatives and she was always correct. It seemed to me at my early age very frightening.

Sometimes friends would come to our house to have their fortunes told with playing cards or have their tea cup read or Palmistry.

It was lots of fun because I made jokes about it, but when the reading came true, I shivered. At that time it was common practice when people visited each other’s home to have their fortune told.

My Father was the youngest boy of the family and was a spoilt youngster. He could not stand discipline or chastisement and therefore, left home at Hanley, Staffordshire and went to Edinburgh, Scotland, where a brother, Fred, was living.

This did not suit him so he wandered all over Scotland and then returned to Edinburgh.

He was a handsome daredevil sort of an individual and was always up to some prank with his chums.

His Friends: ex-soldiers, sailors and others, were going to America and of course, he wanted to go along, which he did.

Mother was left with two children to rear and educate. We were placed in different homes which were not suitable and our health started to fail.

I had taken sick and rushed to the Hospital with a child’s disease and one day Mother brought me a Banana. It was the first I had seen and it tasted wonderful. It was not long before I was out. 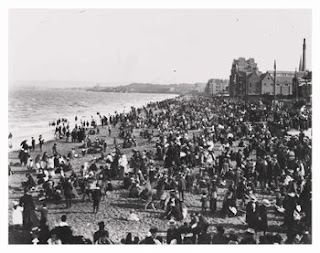 While we were living in Edinburgh, we were taken to Portobello (at left, ca. 1900 – Ed), a sea-side resort (the saying was Edinburgh, Leith, Portobello, Musselburgh and Dalkeith), by someone who did not know that children left alone have the habit of wandering–which Fred and I did.

We were picked up by the local Policemen and taken to the Police Station.

The Police at the Station had lots of fun with us and I can rembember them buying us Ice Cream or it may have been Hockie Pokie – Penny a Lump.

I can remember it as if it was yesterday. Finally Mother got in touch with the Police and they hated to see us go because they were having so much fun amusing us.

I can also remember going to Holyrood Palace, which at that time was a soldier barracks, and the soldiers would have lots of fun with us and give us a Penny.

Permanent link to this article: https://edwardwillett.com/2008/12/the-first-world-war-memoirs-of-sampson-j-goodfellow-part-28-flashback-early-childhood/